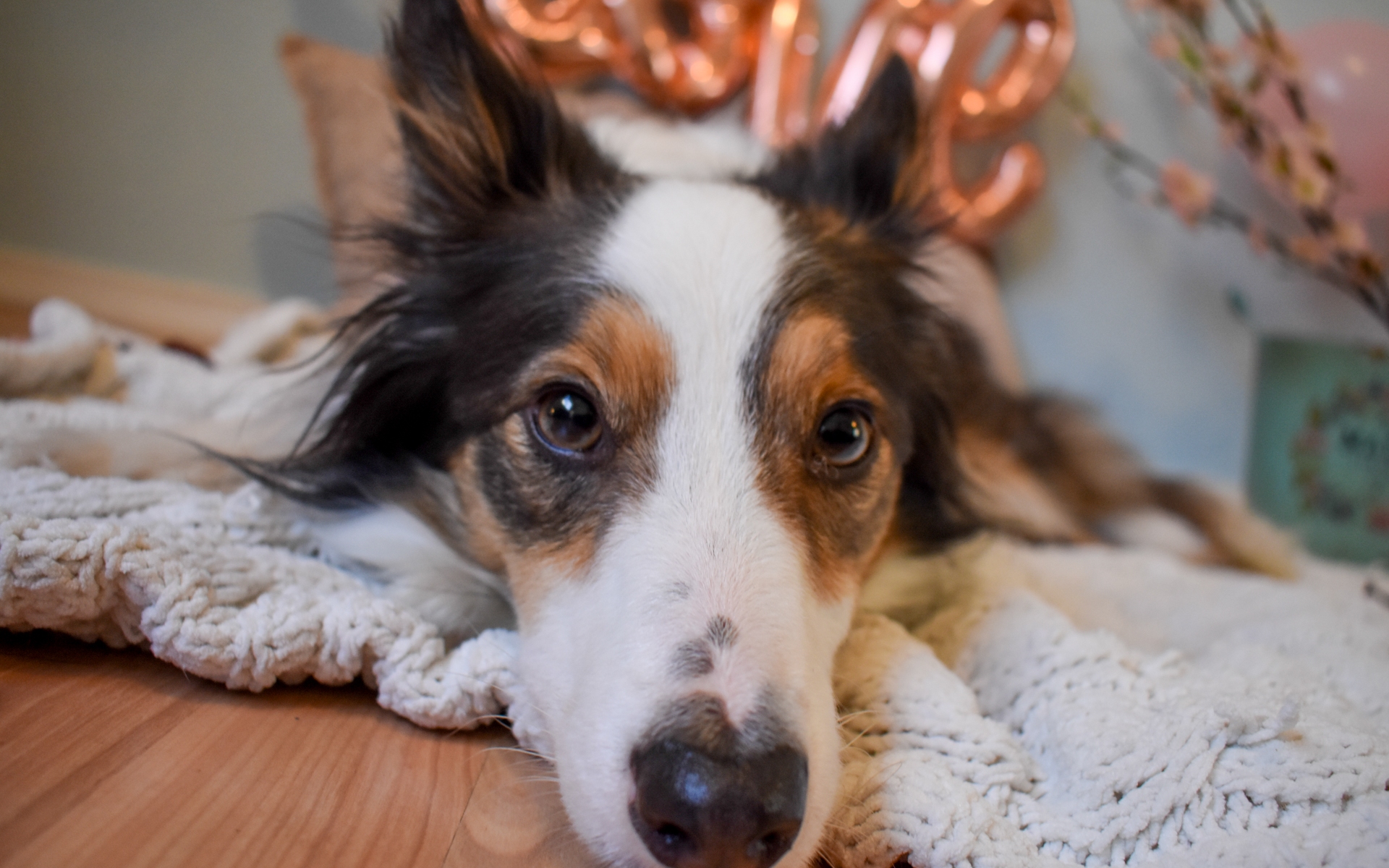 I ordered Valentine’s Day themed balloons from Target and gathered decor for the shoot from around the house, including a cream blanket, blush-colored pillows, fake flowers, a few real flower petals from our backyard, and some antique-looking teal bins.

Originally, I was going to use a photo backdrop, but decided that the teal wall in our guest room tied in perfectly with the decor colors.

Cooper and Fidus have become rather grumpy about food and treats in the last year. As a result, I generally take their photos separately when I know I’ll be asking them to sit still for treats so that they aren’t stressed about the other dog taking food from them.

Cooper was up first. A border collie through and through, Cooper is amazing at following orders. With a little nudging and persuading with treats, I got her in just the right spots in the photo space I’d set up.

After a ridiculous amount of herding the dogs around, it was Fidus’ turn. He is much more treat-driven than Cooper. While Cooper is happy to have a treat, she’s far more pleased to complete a task. Fidus, bless his soul, just wants the treat. Nothing else exists besides that treat. His nose slowly moves closer and closer to the camera (where I’ve balanced a treat atop the lens) during shoots.

Can you see his eagerness?

When doing photoshoots that involve props with pets, be sure to keep an eye on them. Cooper was a little too interested in the fake flowers and the real flower petals. After some redirections (and moving the decor further away from where she was seated) she stopped. Fidus, surprisingly and unsurprisingly, did not try to snack on anything besides the treat teased in front of him.

We didn’t do anything too special for Cooper’s birthday this year — but the next weekend we took her and Fidus on a hike during the Super Bowl when we knew the trails would be emptier than normal. We are thrilled that the hike went well! Cooper learned to politely sit off trail without barking or becoming fearful of the people passing by — a huge step forward for her. Photos coming soon.

I am a huge fan of Halloween (and pretty much all holidays in general) so after seeing the #ghostphotoshoot Reel going around, I knew I had to do one! Those Wes Anderson vibes + Halloween + indie music is *chef's kiss.* I'll be sharing a few of the stills to keep the chills going 'til Halloween 🎃
The Wings of the City exhibit in Greenville, SC, is absolutely fascinating and so unique! These winged statues can be found throughout Falls Park.
Tahoe sunrise at the start of autumn.✔️
Fall in Tahoe is better than I could have ever imagined! 🍂
Just a little bit obsessed with how pretty downtown Greenville, SC is.
Hope your holiday weekend is as jubilant as these flowers. 🌼🌸
During a quick weekend trip to Paso Robles, I got up just in time on Sunday morning to catch a hot air balloon in flight over the area's many vineyards. 🍇🎈
Wishing you a Monday that is as peaceful and contemplative as this squirrel.
I've collected my favorite coastal photos on a new gallery page on the Coop & You website! Link in bio. Prints and products featuring the photos are available through @society6.
That's no rock(s)! It's ever graceful elephant seals. The San Simeon Elephant Seal Lookout is an essential stop when road tripping along the 1. They are delightfully lazy, cranky, and just plain odd looking. They are simply a sight to behold.
When you wake up and realize it's the weekend and can go back to bed. 😌
Happy Friday! Hope your weekend is as vibrant as these Big Sur views.